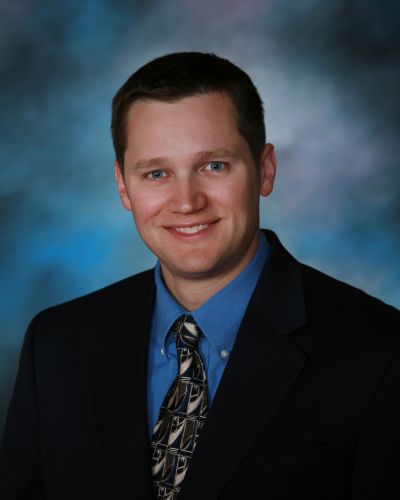 Travis Henderson, MD, grew up in Mobridge and graduated from Mobridge High School. After earning a biology degree from South Dakota State University, he obtained his medical degree from the University of South Dakota School of Medicine in 1997. Following that, he was commissioned in the United States Air Force and completed the Internal Medicine Residency Program at Wright-Patterson Air Force Base, Ohio. His next assignment was Scott Air Force Base, Ill., where he practiced general Internal Medicine until 2004. He is Board Certified in Internal Medicine and specializes in the care of adults and adolescents. In 2007, Dr. Henderson was named Young Physician of the Year by the S.D. Chapter of the American College of Physicians. In August 2010 he was elected, upon the recommendation of peers and the review of ACP's Credentials Subcommittee, a Fellow of the American College of Physicians (ACP) the society of internists. Certifications he holds include Pediatric Advance Life Support, Advanced Trauma Life Support, and Advanced Cardiac Life Support. He is also an ACLS instructor. He and his wife, Misti, have four daughters and make their home in Mobridge.

All form fields are automatically saved on your device.

This will also remove all saved form fields.